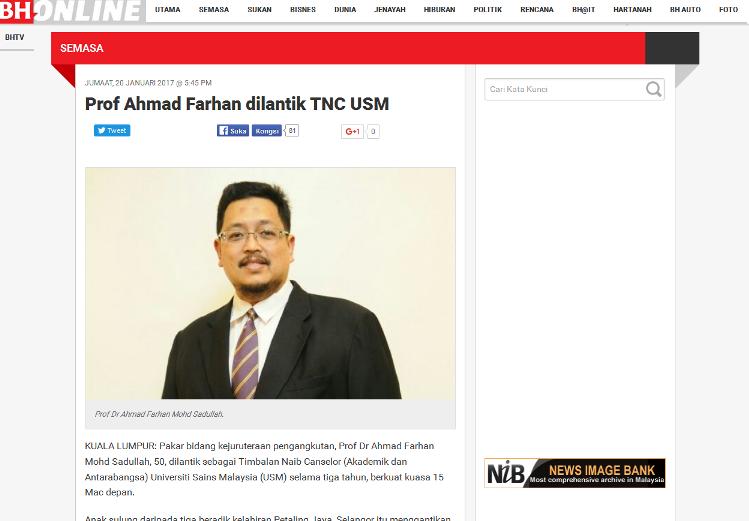 Professor Dr. Ahmad Farhan Mohd. Sadullah, 50, whose expertise is in the field of Transport Engineering, has been appointed as the new Universiti Sains Malaysia (USM) Deputy Vice-Chancellor (Academic and International) effective 15 March 2017 for a three-year term.

He will succeed Professor Dato’ Dr. Ahmad Shukri Mustapa Kamal, 58, who has been in office since 15 September 2007.

Ahmad Farhan was born in Petaling Jaya, Selangor and received his Bachelor’s degree in Civil Engineering from The Catholic University of America, Washington D.C.  (1988); Diploma Imperial College (DIC) from the Imperial College of Science, Technology and Medicine (1990); Master of Science (M.Sc) in Transport (1990) and Doctor of Philosophy (Ph.D.) in Transport Studies (1995) from the University of London.

The eldest of three is the son of an economist who has served with the Economic Planning Unit (EPU), while his mother was a teacher and school Principal who has also served with the Ministry of Education Malaysia.

His began his career in USM as a lecturer in 1995, and he has held the post of Coordinator, Innovation and Technology Development Unit (2000 – 2004), Dean of Engineering and Technological Research Platform (2004 – 2006) and Director of Innovations, USM Research and Innovation Department (2006 – 2007).

Ahmad Farhan is currently the Director of USM Engineering Campus and also the Dean, USM School of Civil Engineering. He has previously been seconded as the Director-General, Malaysian Institute of Road Safety Research (MIROS) from 2008 – 2011.  In 2016, he was appointed as the Head of NBOS Road Safety Cluster, Ministry of Transport Malaysia.

Ahmad Farhan has also been involved in various committees at the national and international levels in his area of expertise encompassing road safety, public transport, sustainable transportation, Intelligent Transport System (ITS) as well as travel behaviour and traffic engineering.

In 2010, he was appointed as a member of the Land Public Transport Commission (SPAD) by the Prime Minister of Malaysia.

In his professional capacity, he is a member of the Road Engineering Association of Malaysia (REAM), committee member of Intelligent Transport System (ITS) Malaysia, as well as being a member of the Institution of Transportation Engineers (ITE), Institution of Engineers Malaysia (IEM), Road Engineering Association of Asia and Australia (REAAA) and Transportation Science Society of Malaysia (TSSM). He is also now a member of the International Scientific Committee (ISC) for the East Asia Society of Transportation Science (EASTS) and has previously chaired the World Road Association (PIARC) Road Safety Operations from 2008 to 2011. In June 2013, he has been appointed as a Professional Panel member to review the safety aspects in the road construction industry in Malaysia.