Malaysia is located in seismically stable Sunda plate and had not experienced any disasterous earthquake occurrences. However, due to the location close to two of the most seismically active plate boundaries, i.e. Indo-Australian and Eurasion plates, Malaysia has experienced numerous strong tremors caused by earthquakes in those two seismically active zones recently. The felt tremor becomes more frequent in the last decade due to the increment of the seismic activity since the major earthquake in Banda Aceh and the unprecedented Indian Ocean Tsunami in 2004. Even though Malaysia is located far from seismic sources, it has a substantial seismic risk from distant earthquakes due to the local geology such as the underlying soft soil tends to amplify ground motions. Therefore, it is imperative to conduct a detailed site-specific seismic hazard assessment and produce seismic microzonation map for specific sites.

In order to achieve this objective, mircrotremor survey has been conducted through a collaborative research project between Disaster Research Nexus, Universiti Sains Malaysia (USM) and Tokyo Institute of Technology (TokyoTech), Japan. The project is funded by JICA AUN/SEED-Net. This collaborative project is headed by Dr. Lau Tze Liang and the co-researchers are Assoc. Prof. Dr. Taksiah A. Majid (USM) and Professor Dr. Hitoshi Morikawa (TokyoTech). The team members involved in this project consist of undergraduate and postgraduate students from both universities as follows:

The project focuses on the eastern part of Penang Island where the capital of the state of Penang is located. It is a highly urbanized with high-rise buildings and important structures and is an economically important area in Malaysia. The microtremor observation is carried out to measure the low amplitude of ambient vibration caused by either human-made or atmospheric disturbance. This research has introduced and promoted the application of new seismic survey technique for the estimation of dynamic characteristics of ground motion in Malaysia. Two types of microtremor measurements namely single point observation and array observation are conducted.

Single point observation using microtremor instrument was carried out from March to August 2012. A total of 322 points were measured in the eastern part of Penang Island. The observation points are located within 500 m to 1000 m apart. The sensor is placed on the ground to measure the ground motion in three directions at the same time. Microtremor measurement is recorded for three to five minutes by data logger. After the measurement, Fourier spectrum for each component is calculated using MATLAB program. From the spectra ratio of horizontal to vertical component, the predominant period and the amplification factor of the ground at that particular site are obtained and mapped. 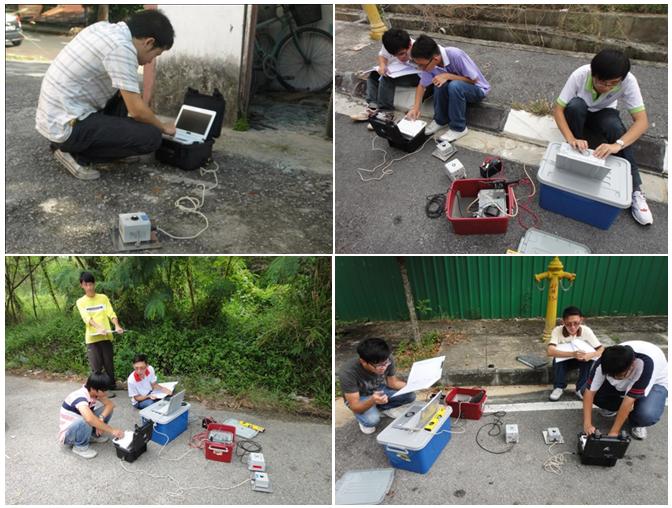 Microtremor array observation is conducted together with the team from TokyoTech from 1 to 11 August 2012. The purpose of this survey is to estimate the substructure of the ground. The array observation is carried out at 15 sites in the eastern part of Penang Island. Two or three types of triangular array networks with the radii varies from 3 m to 70 m are formed based on the condition of the site. Four velocity sensors are used in each array observation. The recorded data will then be analyzed in TokyoTech using the program developed in Morikawa Laboratory.

The field work completed on 11 August 2012. As the celebration of the success of the field work and appreciation to the TokyoTech and USM teams, a farewell party is conducted in a typical Japanese way on 12 August 2012 to express appreciation to Professor Morikawa, Mr. Hamasaki. Ms. Ogura and Mr. Nakamura for their selfless commitment to this project. Not to forget is the invaluable contribution from USM team who had worked hard to pursue new knowledge and skills that had not been learned in the classroom. These have led to the success of this joint research project. 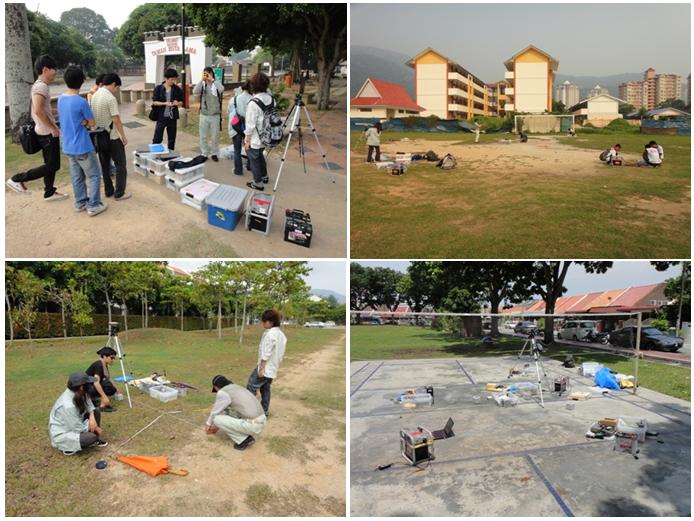 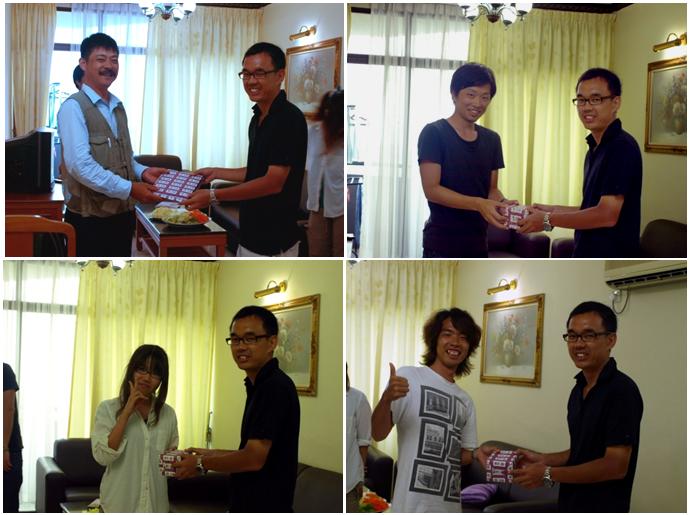 Presentation of token of appreciation to Japanese team

The outcome of the microtremor survey done in the eastern part of Penang Island has provided a useful information that is essential for seismic design. From this research project, USM team has acquired the relatively new technique for seismic survey through technology transfer and guidance given by Tokyo Institute of Technology. This is in line with the transformation of the higher education through human capital development in USM. This research project also provides a better platform for researchers and students from both institutions to interact and discuss important issues related to earthquake engineering. From this collaborative research project between Universiti Sains Malaysia and Tokyo Institute of Technology, the successful network has been built and strengthened. This will definitely foster more research collaboration in near future.